Since my 3 week assessment in a mental health unit recently, I've been forced to take Risperidone. They have robbed me of many things including creativity, drive and opinion.  This is why blog posts are now thin on the ground. The tablets leave you feeling 'flat' and without any ambition at all. They have also left me without a quality of life. I have no appetite and am forced to make myself eat. They have left me without ability to sleep. I go go off for about an hour but the rest of the time I am simply a zombie. I miss my opinionated self and ability to think for myself and my positive thinking, though I realise at times I can be, or was, acutely unrealistic about some things. I feel very useless now and at my age, that isn't too great. So this is for the few regular readers who kindly check out my posts regularly. Thanks and maybe one day, I'll be back.
Posted by Unknown at 06:19 No comments:

My own spam email selling me drugs? What to do?

Just had an email from 'myself' again, trying to sell me drugs, I hate it that there's no remedy here - other than to report my own email address as a scam

Psychiatry archaic and ignorant? I think so

Psychiatry appears to be out of date and pretty stupid in locking women up for not doing the housework and for not noting science.

I found an article about how men don't do housework, would the local services have locked any of them up? What's going on? Seems there are nutty and tidy-freaks locking up women for failed housework duty? This is not to say 'clutter disorder' or hoarder/squalor disorder doesn't have merit in identification, nobody wants to live in a tip, unless there is something seriously wrong, but the remedy? To lock people up for months at a time? Or three weeks (and four months last year) in my case? It seems insane stuff is coming from the mental health services.  They exaggerate is for sure. Last time my floor had a coffee stain on it, it was reported by local mental health service pro as 'tonnes of rubbish, food on the floor, rats and cockroaches' no. It was a coffee stain on the floor, get over it another way? Meanwhile there is kind reaction at the forum for squalor disorder. One wrote 'sorry for your loss' which is what I wanted to hear.

Was it worth it? Locking me up for a messy home? Granted, it looked bad in here last year after the flooding from above (that was never addressed properly) and that was when I lost everything I ever owned. I mean jewellery and photographs - my entire life, gone. The worst thing is, there seems to be absolutely no recourse to justice and in fact they repeated the offence by locking me up for three weeks again recently. Well to say I am paranoid about cleaning now, is a bit of an understatement.

And why does psychiatry not address the issue of low and high blood sugar and its effects on mental health? It's simple hard science that stimulants also stimulate, so at least get people off high gi diets and onto low gi as well as getting folks offa caffeine? Archaic. 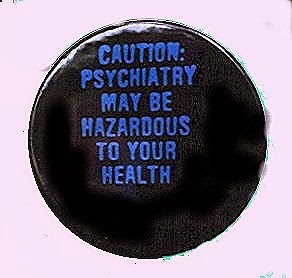 Family and Parenting Centres across the EU - may prove great - non means tested?

Waiting for the arachnid


Just found a forum about surviving squalor. Not really me but I am untidy. Always have been a 'mess' as my friend would say. I think part of the problem of my laziness is lack of oxygen which is why I like to keep windows open - weather permitting - and often freeze other people in the process. I guess I am feline when it comes to housework. Life of a cat, heart of a dog, is it. This translates to various pathological labels that the NHS can tuck into at will, but I digress.  The forum prompted me to look twice at the Hoover (vacuum cleaner of some brand or other) and I tried to figure it out. 'Line up the arrows' had me dropping the device in despair as the arrows were already lined up and nothing was coming off that was meant to. Concluded that a new machine is in order. This time, will get a bright spark in to show me how to work it - just as long as I'm not in hospital but out here in the land of the living, ish.  Oh to live like the spider in my bathroom. Existing in peace,nobody hassling it. The Electrician who came to fix the light in the bathroom today, said he had a 'similar sized one, above the drivers seat' you get the feeling that these wily arachnids are taking advantage and biding their time before attacking us nice folk, which could end in mortal wounding. We're just saying to spidey 'do not move, do not run, do not hassle me, and you can live in peace' but ya know, they have a habit of going a bit mental and running about at times. We, me and the builder, are twin souls in the 'spider protector' department. Both protecting, both wary - mind you - if I were him, I'd splat his seeing as if it dropped when he's driving it could kill him. Mine would only give me a brief 'heebegeebee' thing. So all this as I wait for a doctor to descend like a giant arachnid on my private life, all must be declared, all my privacy, justifying my existence again. Jealous of a spider. 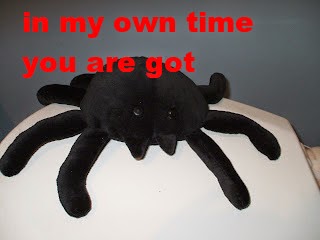